WASHINGTON, D.C. — Today, 176 organizations called on President Biden to extend the pause on federal student loan payments for tens of millions of borrowers that is currently set to expire on August 31st. Advocates write in a letter that resuming payments will throw borrowers back into a system plagued by mismanagement, corruption, and abuse, even as polls continue to show that borrowers are not financially prepared to restart payments. The organizations also remind the President that his administration has yet to deliver on a wide range of promises to fix ongoing failures throughout the student loan system and deliver debt relief to public service workers, low-income people, students defrauded by for-profit schools and others.

As President Biden considers a sweeping executive action to cancel a substantial amount of federal student loan debt for all borrowers, these organizations write: “People with student debt cannot be required to make payments toward loans your administration has promised to cancel.”

A copy of the letter to President Biden can be found here.

Recent reports suggest that President Biden may be considering a rushed restart of federal student loan payments as part of a misguided effort to combat inflation by taking money out of the pockets of people with student debt. These reports come as the Biden Administration has acknowledged that it is weighing an historic effort to cancel student debt for tens of millions of people via executive action.

“We … strongly urge your administration not to collect money from people with student debt as a tactic to fight inflation,” 176 organizations wrote to President Biden. “Instead our organizations urge you to enact robust student debt cancellation that is not means tested and does not require an opt-in for participation and to fully implement this policy before any student loan bill comes due.”

Before the pandemic struck, tens of millions of borrowers struggled to navigate a badly broken student loan system. America’s student debt crisis wreaked havoc on the financial lives of families across the country, despite payment relief and debt forgiveness programs that promised that these debts would never be a life-long burden. Since taking office, President Biden has already announced a range of new policies that, if fully implemented, promise to deliver debt relief to millions of borrowers. Any new action to broadly cancel student debt could expand this promise to tens of millions of additional borrowers.

“The pause on most federal student loan payments during the pandemic has provided much-needed breathing room for the AFT’s over 1.7 million educators, nurses and public employees, along with millions of other borrowers who feel pauperized by crushing student loan debt” said American Federation of Teachers President Randi Weingarten. “A hasty restart of payments now, in this time of rising costs, and while thousands are still waiting for their loan forgiveness applications to be processed, would be devastating. This is no time to shift the burden of a broken student loan system onto the backs of working people. We are asking the Biden administration to continue the payment pause, extend the PSLF waiver, and help us ensure that people working to help our communities get the debt relief they need so they can stay in those jobs and not face an affordability crisis.”

Earlier this month, an historic labor and civil rights coalition called on President Biden to “immediately” cancel student debt by executive action. More than 550 organizations, including the United Auto Workers, the International Brotherhood of Teamsters, the United Food and Commercial Workers, the Service Employees International Union, NAACP, and UnidosUS, explained that, by cancelling student debt, the Administration will “strengthen the economy, tackle racial disparities, and provide much-needed relief to help all Americans weather the pandemic and record inflation.”

“Student debt cancellation would provide meaningful financial relief to families across the country, and particularly to low-income and Black families whose ability to make ends meet is threatened by outsized student debt burdens,” said Abby Shafroth, director of the Student Loan Borrower Assistance Project at the National Consumer Law Center. “But that relief–and the goodwill it would generate–would be jeopardized if the Administration throws borrowers back into repayment before it actually delivers on promised cancellation. Millions of struggling borrowers would be forced to suddenly pay hundreds of dollars a month toward a debt that they have been told will be cancelled, or risk damage to their credit if they cannot or do not pay.”

“The federal payment pause is a temporary fix to a problem that requires a permanent solution,” said Jaylon Herbin, policy and outreach manager and student loan lead at the Center for Responsible Lending. “President Biden can and should use the authority of executive action to uphold the administration’s commitment to helping communities of color and women, who deserve the ability to build their American dream. The time is now to cancel $50,000 in student loan debt, reform our educational system and begin addressing the racial wealth gap.”

“From the COVID-19 pandemic to skyrocketing inflation, Americans with have faced one crisis after another. For millions of people, the pause on student loan payments is the only meaningful relief they have received in months,” said Cody Hounanian, executive director of Student Debt Crisis Center. “President Biden must extend the payment pause and cancel student debt before anyone has to make a payment again. Doing so will give Americans time to get back on their feet and an opportunity to thrive in months and years to come.”

“Cancelling student debt can be transformational for tens of millions of people, but if President Biden leaves borrowers begging for relief at the moment their bills come due, his legacy will just be his attempt to break inflation on the backs of people struggling with historic levels of debt,” said Student Borrower Protection Center executive director Mike Pierce. “When President Biden decides to cancel student debt for everyone, borrowers need more than just another promise buried in the fine print at the bottom of a loan bill.”

According to a series of tracking polls released by Data for Progress and the Student Borrower Protection Center, more than 6-in-10 likely voters with student debt consistently expect to make “major changes to saving or spending” if student loan payments resume. 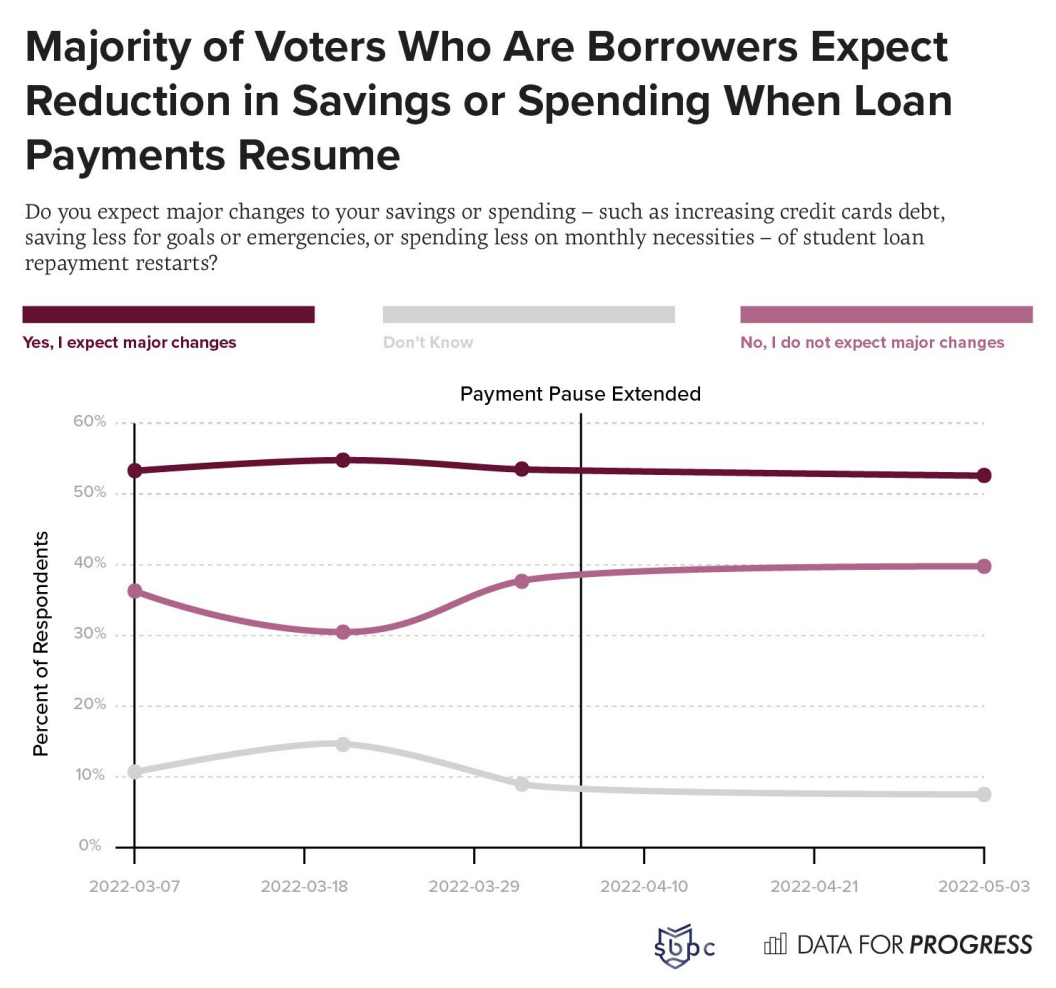